The following articles marks a transition in my life as a photographer. With the amount of sewing and other preparations for one shoot, a lot of my time and energy is filtered on those efforts leaving little else for writing. Regardless, this hardly seems like an excuse. I’ve also been feeling my writing is stagnant. The same old thing. For now, I’m going to relate my recent experiences over the summer in my hum-drum way. 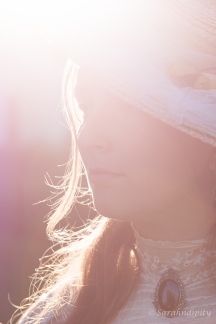 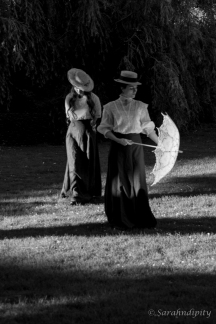 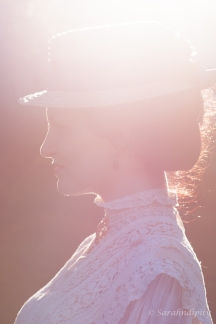 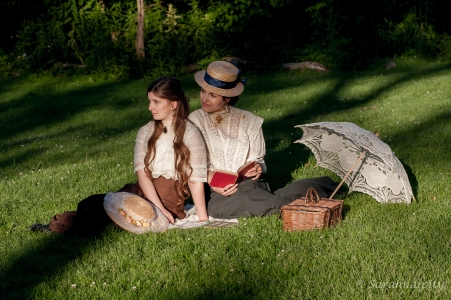 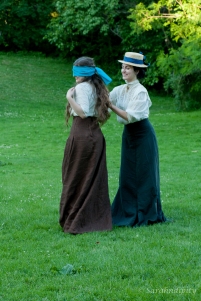 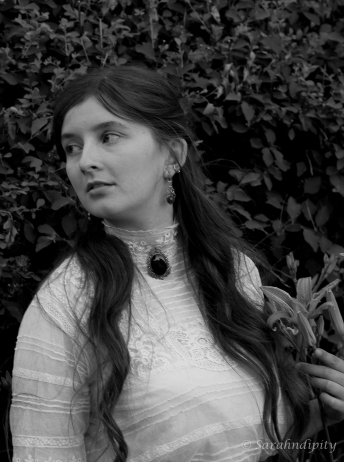 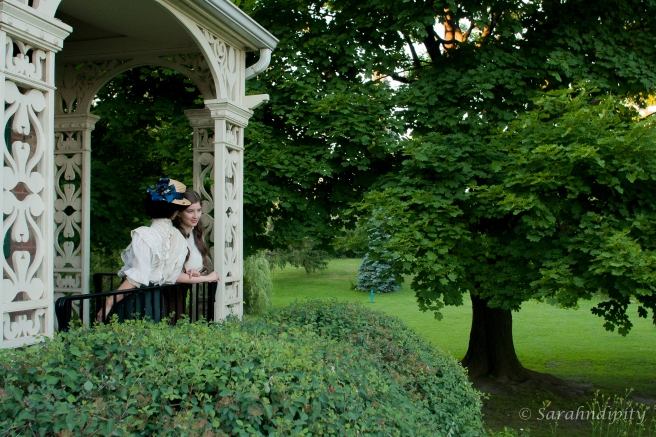 When the studio in Liberty Village was no longer available to me, I looked upon this as an opportunity to expand beyond my usual self portraits. Something I’ve been meaning to do for quite a while. A perfect extension to “The Anachronist” called, “Group Tableau’s”. It’s still an exploration of Edwardian life through the camera, only I have willing victims to play the roll. While in a cafe, one day, I fell into conversation with a young woman who worked there, finding a lot in common. On a whim I asked if she’d be interested in modeling for me. When she said yes, I fell to work making a costume for her. After Charlotte, I asked my hair stylist to model for me. From there, everything fell into place. It delighted me to see genuine interest and excitement from Charlotte and Kai. It seemed as though I was pulling teeth to find anyone willing enough. Hundreds of dollars and I’m sure as many hours later, I was ready for the first Group Tableau shoot.

In making a costume for someone else, I felt as though I was crawling out of a shell. The learning curve I went through within the next few months was a wonder to me. On instagram I follow many talented people who have taken structured classes, producing many an amazing period garment. At Stitch and Bitch I was praised and encouraged by Marianne, my friend and sewing teacher. ‘Cause you know, it’s nice to have that pat on the back from someone other than yourself.

One bright summer afternoon, for which I left work early; Kai, Charlotte and I wandered onto the grounds of Sarah Ashbridge Estate. What a beautiful day! Blue sky, sunny and not too hot. There was such inspiration – an almost story book feeling as I observed the girls (as I call them) interacting with each other. Leading up to the shoot, I was nervous about how well Kai and Charlotte would work with each other. I needn’t have worried. Before long, they were giggling and making up stories. In their play acting, whatever roll they made for themselves; sisters, companions, pupil and governess, their interaction breathed life into the shoot. We covered almost the whole grounds except for a very old willow tree which a couple had commandeered for themselves. Ugh. Get a room!

But there was something missing. The costumes didn’t look quite right. The girls were not wearing
proper under ware. No petticoat or corset covers, things that would give the correct period look. I blame myself as I told them I wouldn’t make them wear petticoats on such a warm day. So I made more petticoats and started making corset covers. At this time, I hadn’t made a shirt waist for Charlotte. The shirt waist I have on her is completely wrong for her body type.

I can honestly say, I probably won’t use these photos in a show because of so many of the above variables. With that in mind, it was a great start to the project with lessons learned. The best thing about that day? When we were all our twenty-first century selves again dining at Queen Margarita’s. Kai and Charlotte thanked me for allowing them to be models. I was flabbergasted! They, thanking me?! LOL! I told them then and many times since; I’m the one that has to thank them!